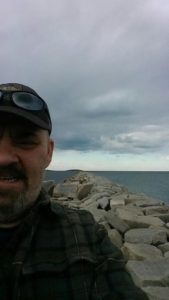 My name is Mike and thanks to Freedom House I now have seven years sobriety.

I was in Spring Harbor Hospital prior to coming to Freedom House due to a suicide attempt while drinking and using drugs.

The police found me near death on a park bench. I was revived and spent nine days at Maine Medical Center and was then sent to Spring Harbor.

I got Ben’s number and called him after spending three weeks there. I felt well enough and was ready to try and get into recovery, and I was accepted into the Freedom House.

I had no money for rent at the time when Ben picked me up and was told the most important thing was to keep me off the streets so I could give this a shot.

They said not to worry about the money and to begin paying rent when I was on my feet.

So this is where my recovery began.

The requirements were to go to at least two meetings per week, get a sponsor and work the twelve steps, plus regular volunteer work at the soup kitchen.

At Freedom House I also got help finding resources in the community such as case management, therapist, psychiatrist, and other supports that would help me in recovery.

I like the accountability that comes along with being a resident at Freedom House.

The zero tolerance policy for drug and alcohol use makes me feel like I am safe. I love the support I receive from the management and they are always available if I need additional support.

I can see myself transitioning into my own apartment within the next couple years but I am not feeling rushed. I like it that there is no time limit on my stay—I just have to work a recovery program and stay sober.

Since I have been here I have reconnected with my children and their mother and have been able to be a father and support my children.

That is the greatest feeling in the world.